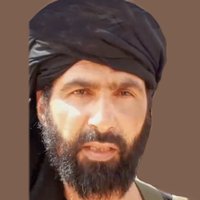 Adnan Abu Walid al-Sahrawi is also known as Lehbib Ould Ali Ould Said Ould Yumani. He leads the Islamic State in the Greater Sahara. He and his followers left the al-Qa'ida splinter group Al-Mourabitoun. He is based primarily in Mali along its border with Niger. He was born in the Western Sahara. His family was wealthy, but they had to flee to a refugee camp in Algeria. He is an ethnic Sahrawi. The tribal name literally means "desert inhabitant." Their culture is a Berber, Black African, and Arab mix. In the 1990s he trained with the Polisario Front for liberating Western Sahara from occupation. He finished university in 1997 with a degree in social sciences. In 2010 he joined up with al-Qa'ida in the Islamic Maghreb. In 2015 he declared allegiance to Abu Bakr al-Baghdadi and formed up the Islamic State in the Greater Sahara. The US Department of Justice is offering $5 million for information to locate him.