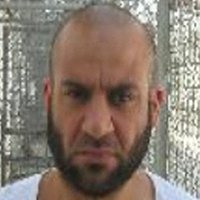 Amir Muhammad Sa’id Abdal-Rahman al-Mawla is also known as Hajji Abdallah and as Abu Ibrahim al-Hashimi al-Qurashi. He became the overall leader of ISIS upon the death of its notorious founder, Abu Bakr al-Baghdadi. Before that, as the second in command, he helped drive and justify the abduction, slaughter, and trafficking of the Yazidi religious minority in northwest Iraq. He also led some of the group’s global terrorist operations, and he helped ISIS to capture Mosul in June 2014. He is an Iraqi Turkmen. He was born in 1976. He studied Sharia Law at the University of Mosul in Iraq, and he served as an officer in the Army under Saddam Hussein. US forces captured and detained him in 2004 at Camp Bucca in southern Iraq where he would have met the fellow detainee who became Abu Bakr al-Baghdadi. The US Department of Justice is offering $10 million for information that brings him to justice.