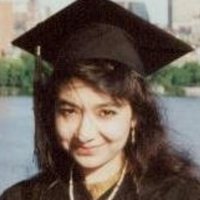 Aafia Siddiqui was born in Pakistan in 1972. She came to the USA in 1990 to study. She earned a degree from MIT in 1995 and a PhD from Brandeis University near Boston in 2001. Her three children Maryam, Akmed, and Suleman were born in 1996, 1998, and 2001 in America. She appears to have had associations with Al-Qaeda operatives and to have aided them with money and materials. She disappeared in 2003. In 2008 she was wounded in a firefight in Afghanistan and taken into US custody. She supposedly had bomb making materials and instuctions in her posession. A month later, a U.S. District Court charged her with assaulting and attempting to kill US personnel while detained in Afghanistan. She is reported to be in poor health and psychologically too unstable to stand trial.