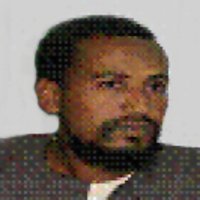 Abdelbasit Alhaj Alhassan Haj Hamad was a shooter in the murder of two USAID employees on New Year's Day 2008. In the Sudanese legal system he was tried and convicted along with four accomplices. He was sentenced to hanging. He escaped from prison in June 1010, and fled to Somalia. The US Department of Justice is offering $5 million for information leading to his capture.