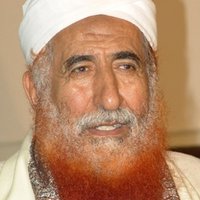 The US Treasury Department lists Abdul Majeed al-Zindani as a "Specially Designated Global Terrorist." He was born in 1942. He is founder and President of Al Iman University in Yemen. He founded the Charitable Society for Social Welfare that is suspected of funding terrorists. He recruits for Al-Qaeda training camps and spiritually advises Al-Qaeda leaders. Anwar al-Awlaki, who corresponded with the Fort Hood shooter Nidal Hasan, teaches at his university.