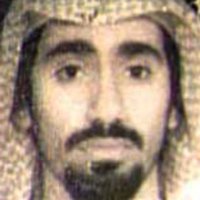 Abdul Rahman Hussein al-Nashiri was born in 1965 in Mecca, Saudi Arabia. He is also called Mullah Bilal. He is currently detained at Guantanamo Bay, Cuba as the one time head of al Qaeda in the Persian Gulf, mastermind of the October 2000 attack on the USS Cole, and organizer of other attacks like the one on a French oil tanker in 2002. He is one of three detainees there said to have been waterboarded. His brother was one of the 1998 US embassy suicide bombers in Kenya. Al-Nashiri was caught in 2002 in the United Arab Emirates and has been sentenced to death in absentia in a Yemeni court. In April 2011, U.S. military prosecutors charged him with law-of-war violations for which they will be seeking the death penalty.