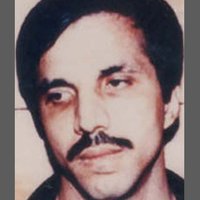 Abdul Rahman Yasin was born April 10, 1960, in Bloomington, Indiana, when his Iraqi father was a PhD student. He was able to return to America in 1992 as an American citizen after growing up in Baghdad. He has acid burn scars on his legs from spilled bomb making chemicals. He helped prepare the explosives used in the first World Trade Center bombing of February 26, 1993. He is affiliated with Al-Qaeda.