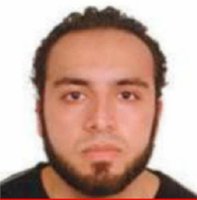 Ahmad Khan Rahami is linked by forensic evidence to bombings that happened in New York City and in New Jersey on September 17, 2016, and to numerous unexploded devices found at a train station in New Jersey. The New York detonation injured 29 people. He was wounded in a shootout with police and taken into custody on September 19. He is curently serving a life prison sentence. He was born on January 23, 1988. He came to the United States from Afghanistan in 2000, following his father who had come several years earlier as an asylum seeker. He became a naturalized US Citizen in 2011. His father had been an anti-Soviet fighter in Afghanistan who was critical of the Taliban. He started making trips back to Afghanistan and Pakistan in 2012. He started showing signs of radicalization following his first trip.