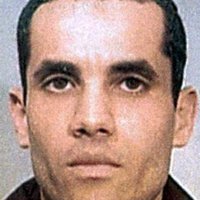 Ahmed Ressam was born May 19, 1967 in Algeria. He has become known as the “Millennium Bomber” for plotting to bomb Los Angeles International Airport on that New Year's Eve. He entered Canada from Algeria with a forged French passport in 1994. In 1998, he traveled to Afghanistan for weapons, poisons, and explosives training. He returned to Canada in 1999. Authorities caught him on December 14th crossing from Vancouver with nitroglycerin and timing devices hidden in the spare tire well of his rented car. During sentencing to 22 years, he sent the judge a note apologizing for his bomb plot. On appeal his sentence was extended to 37 years. He is serving that time at the ADX prison facility in Florence, Colorado.