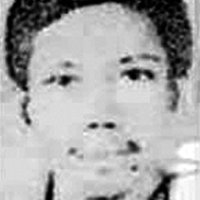 Aris Sumarsono goes by the name of Zulkarnaen. He was born in 1963 in Central Java, Indonesia. He is probably Indonesia’s most dangerous terrorist leader. He is the suspected operations chief for the Al Qaeda affiliated group Jemaah Islamiah, and heads the elite squad responsible for the 2002 Bali night club and the 2003 Marriot Hotel bombings. After his own training in Afghanistan, he coordinated the training of others, and probably organized the cleansing fighting against Christians in the Maluku Islands during the late 1990s. The U.S. Department of Justice is offering $5 million for information that brings him to justice.