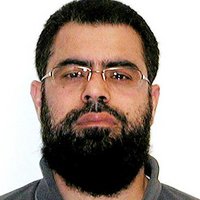 He was arrested at the end of October 2010 for plotting to assist in bombing Metro stations throughout Washington, D.C. He was born in Pakistan. He grew up on Staten Island in New York. He became a US citizen around 1993 at the age of 17. Some of his Muslim associates tipped off the FBI that he wanted to kill US citizens abroad. The FBI trapped him in a sting operation. He had a good job in the computer industry. He has an attractive British wife and a new baby. When asked if he aspired to be a suicide bomber, he boasted, "Of Course." He also boasted of being skilled with a gun and knife and being able to teach martial arts. However, when pleading guilty in April 2011, he wrote, "I know that my conduct could have endangered many people, and I am happy that nobody was actually injured. . . . I am truly sorry for my conduct, and I especially regret that I have let down my family (particularly my wife and young son), my faith, and my country." He was sentenced to 23 years in prison.