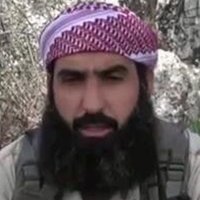 Faruq al-Suri is also known as Abu Humam al-Shami and Samir Hijazi. He was born in 1977 in Damascus, Syria. He leads an al-Qa'ida affiliated terrorist organization called Hurras al-Din that operates in Syria. He trained with al-Qa'ida in Afghanistan in the late 1990s, and he became an al-Qa'ida trainer. He trained and led insurgency fighters in Afghanistan and in Iraq off and on through 2007. He spent five years at the Roumieh Prison in Syria starting in 2007. From 2012 to 2016 he led the al-Nusrah Front in Syria. He emerged as Hrras al-Din's leader in 2018. The US Department of Justice began offering $5 million for information that leads to bringing him to justice on September 10, 2019.