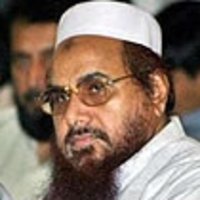 Hafiz Mohammad Saeed is the founding member of a radical Islamist organization called Jamaat-ud-Dawa. It operates in Pakistan and India. It wants Islamist rule throughout the world. It's military branch, Lashkar-e-Tayyiba is suspected of masterminding terror attacks in Mumbai in 2008. Hafiz Saeed was born around 1950 in Pakistan. The U.S.A. has been offering $10 million for information helping to locate him. Pakistan authorities arrested him in July 2019.