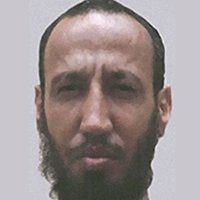 Hamad el Khairy is a citizen of Mali who was born in Mauritania in 1970. He is goes by the names of Abderrahmane Ould Mohamed Lemin Ould Mohamed Khairy and  Abou Qumqum. He is the leader and a founding member of the terrorist group Movement for Unity and Jihad in West Africa (MUJWA, also known as MUJAO and TWJWA). Under his leadership, MUJWA members have carried out kidnapping operations, terrorist attacks, and abductions of foreign diplomats. He has claimed responsibility for the April 2012 kidnapping of seven Algerian diplomats in Mali, and has appeared in videos making threats against those who oppose his organization. In January 2012, he stated that MUJWA's goal was to "impose sharia law across the whole of WestAfrica." Prior to his creating MUJWA in September 2011, he was a member of al-Qaida in the Maghreb (AQIM). The US Department of State is offering a $5 million reward for information that helps to capture him.