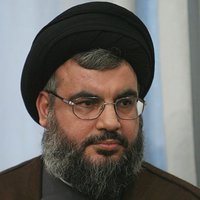 Hassan Nasrallah was born in 1960 in Beirut as the eldest of nine children, He became the Hezbollah’s General Secretary when his predecessor was assassinated in 1992. Hezbollah is a Shiite political and paramilitary organization based in Lebanon that opposes the existence of Israel. Six countries (Australia, Canada, Israel, Netherlands, United Kingdom, United States) officially declare Hezbollah to be a terrorist organization.