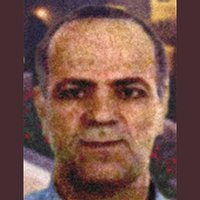 Khalil Yusif Harb is also known as Sayyid Ahmad and Abu Mustafa. He was born on October 9, 1958. He is thought to be in Syria or Yemen. He is a close adviser to Secretary General Hassan Nasrallah who leads the Lebanese Hizballah terrorist group. He has served as the group’s chief military liaison to Iranian and Palestinian terrorist organizations. He has commanded and supervised the organization’s military operations in the Palestinian territories and several countries throughout the Middle East. Since 2012, he has been involved in the movement of large amounts of currency to Hizballah’s political allies in Yemen. The U.S. Department of Justice is offering $5 million for information leading to his capture.