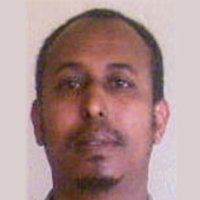 Mahad Karate is also known as Abdirahman Mohamed Warsame. He is believed to be in his forties. He is a Deputy leader or emir in al-Shabaab. He played a key role in the wing of al-Shabaab responsible for assassinations that is called the Amniyat. He had a role in the attack on Garissa University College in April 2015 that resulted in 150 deaths. Al-Shabaab's intelligence wing is involved in suicide attacks and assassinations in Somalia, Kenya and other surrounding countries. It provides logistics and support for al-Shabaab terrorist operations throughout the Horn of Africa. The US Rewards for Justice program is offering $5 million for information that brings him to justice.