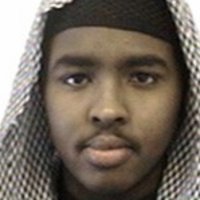 Mohamed Abdullahi Hassan turned himself in to Somali authorities in 2015. He became wanted by the FBI at 22 years old on August 4, 2010, for conspiring to support a terrorist organization in Somalia and conspiring to kill persons abroad. He was also similarly charged in August 2009. He reportedly departed for Somalia in 2008 before graduating from Roosevlet High School in Minneapolis. He was communicating with friends in the United States and trying to recruit for Al-Shabab. For a while his Facebook profile picture was of Osama bin Laden. He says that he left al-Shabaab in 2013 because they were needlessly killing and torturing people.