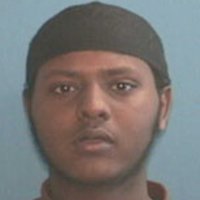 Mustafa Ali Salat is also known as Zubayr. He is reportedly detained by Al-Shabaab in Somalia for attempting to defect from that terrorist organization after having joined it. He is wanted by the FBI for conspiring to support a terrorist organization in Somalia and conspiring to kill persons abroad. He was born in 1990. He has been a permanent legal resident of St. Paul, Minnesota. He departed for Somalia in August 2008 before graduating from Harding High School in St. Paul, where he had been on the wrestling team. Earlier in that summer he and friends had been seen canvasing apartment complexes in south Minneapolis trying to raise money allegedly for an orphanage..