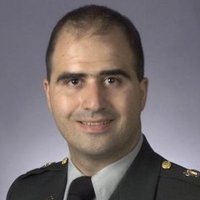 Nidal Malik Hasan shouted "Allahu Akbar" and then shot over three-dozen soldiers in a Soldier Readiness Processing (SRP) center at Fort Hood on November 5, 2009. Over a dozen died. He is an Army Psychiatrist. He was born in America in 1970 to immigrants from Palestine. He attended high school in Virginia. He enlisted in the Army in the 80s. He graduated from Virginia Tech in 1995. He earned his medical degree in 2001. He did his residency at Walter Reed Army Medical Center. He completed a fellowship in Disaster and Preventive Psychiatry at the Center for Traumatic Stress in 2009. In 2001, he attended a mosque in Virginia at the same time that it was attended by two of the 9-11 hijackers. Leading up to his attack, he demonstrated sympathy for suicide bombers and jihadist extremism. He was finally court-martialed in August 2013 and sentenced to death.