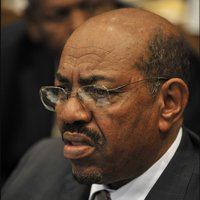 Omar al-Bashir was born in 1944 in a small town north of Kartoum. He is was the President of Sudan until deposed by the military in April 2019. His was a likely terrorism (and genocide) sponsoring government. Omar received military education in Cairo, fought with Egypt against Israel in the 1973 war, and became a general in 1980. In 1989 he led a coup, deposing the elected prime minister, to become the Chairman of the Revolutionary Command Council for National Salvation, through which he took effective legislative, executive, and military control, and began implementing Shari law in the north. In 1993, he was appointed President.