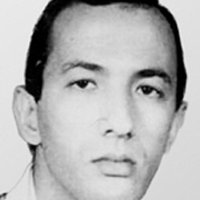 Saif al-Adel uses birth years of 1960 and 1963. He belongs to Egyptian Islamic Jihad and Al Qaeda. He fought the Soviets in Afghanistan, then moved on to Al Qaeda’s military committee, providing military intelligence and training to operatives in Afghanistan, Pakistan, Sudan, and Somalia. He established a terrorist training camp in Somalia. He is skilled with explosives and was involved in the 1998 US embassy bombings in East Africa, and helped to produce a propaganda video that includes a Cole bombing reenactment. During the US invasion of Afghanistan, he probably escaped to Iran, where he may be under house arrest for future bargaining leverage. The U.S. Department of Justice is offering $10 million for information that brings him to justice.