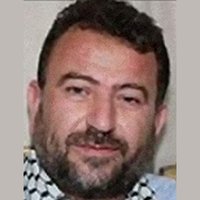 Saleh al-Arouri is also known as Salih Muhammad Sulayman al-Aruri and as Salih Dar Sulaiman. He was born on August 19, 1966 in Ramallah of the West Bank. He is a Lebanese citizen. He is thought to be living in Turkey with rumors that he shuttles to Lebanon and Qatar. He is one of the founders of the Izzedine al-Qassam Brigades and was elected deputy leader of the Hamas Political Bureau. He funds and directs Hamas military operations in the West Bank and has been linked to several terrorist attacks, hijackings, and kidnappings. He announced Hamas’s responsibility for the June 12, 2014 terrorist attack that kidnapped and killed three Israeli teenagers in the West Bank, including dual U.S.–Israeli citizen Naftali Fraenkel. He publicly praised the murders as a “heroic operation. The U.S. Department of Justice is offering $5 million for information leading to his capture.