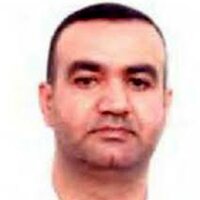 Salim Ayyash is also known as Salim Jamil and Jabber "The Ghost". The US Department of Justice is offering $10 million for information leading to his capture. He is wanted for leading the team that assassinated former Lebanese Prime Minister Rafik Hariri in February 2005. That explosion additionally killed 21 and wounded 226. He is also wanted for attacking three other Lebanese politicians in 2004 and 2005. Ayyash was born on November 10, 1963 in Harouf Lebanon where he grew up and served as a Civil Defense fire fighter. He has lived in Hadath, Nabatiyyeh, and Beirut.