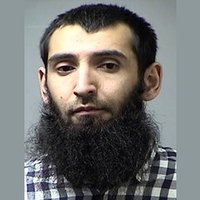 Sayfullo Saipov went on a killing spree in the name of ISIS in New York City on the afternoon of Halloween, October 31, 2017. He rented a truck from Home Depot and drove it for a mile down a bike path in Lower Manhattan along the Hudson River mowing down cyclists, joggers, and walkers along the way. He killed 8. He was born in Tashkent, Ubekistan on February 8, 1988. He legally immigrated to America in 2010. He worked driving a truck and driving for Uber. He married in 2013 and has three children. He has lived in Ohio and Florida. He was living in Paterson, New Jersey at the time. From his cell phone and computer records, he appears to have "self-radicalized" through ISIS propaganda. After crashing into a school bus, a police officer shot him in the abdomen. While recovering in the hospital, he reportedly said that "he felt good about what he had done," and he wanted to display the IS flag.