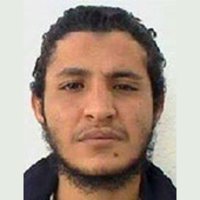 Shawki Ali Ahmed Al-Badani is a leader and operative for al-Qaida in the Arabian Peninsula (AQAP). He reportedly assigned an AQAP member to target the Sana, Yemen U.S. Embassy in 2012. He also has been described as being connected to a suicide bomber who killed over 100 Yemeni soldiers in a May 2012 attack. Furthermore, he played a key role in a plan for a major attack in summer 2013 that led the United States to close 19 diplomatic posts across the Middle East and Africa. He is on Yemen's Most Wanted list and the Yemeni government has offered a $100,000 reward for anyone who can offer information about him, describing him as one of "the most dangerous terrorists affiliated with al-Qaida." The US Department of State is offering a $5 million reward for information that helps to capture him.