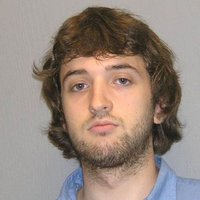 Zachary Adam Chesser (a.k.a. Abu Talhah Al-Amrikee), was arrested and charged in July 2010 for assisting the Al-Qaeda linked terrorist organization in Somalia called Al-Shabab. In February 2011 he was sentenced to 25 years in prison. In April 2010 he gained notoriety for threatening the creators of a South Park episode for depicting Muhammad. He grew up in Northern Virginia. He was in a gifted and talented program in middle school. He participated on football, basketball, and crew teams in high school. His interest in Islam began after graduating from high school in 2008. By April 2010, he had established a radical presence on the Internet with the LearnTeachFightDie YouTube account and the mujhidblog.com web site. He endorsed spreading jihad globally and posted material on behalf of Al-Shabab. He was a student at George Mason University. He is active the international Muslim organization Hizb ut-Tahrir, which wants to establish a worldwide Muslim theocracy.