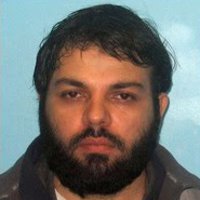 Zarein Ahmedzay pled guilty in April 2010 to terror charges. He allegedly conspired with Najibullah Zazi and Adis Medunjanin to bomb subways in New York in September 2009. In November 2012, he recieved a sentence to life in prison. The three were high school classmates in Queens, NY. In 2008 they trained at terror camps in Pakistan together. Zarein was born in Afghanistan. He is a licensed taxi driver. In 2007, he took the civil service test to become a city fire fighter. He claims to have been motivated by a desire to end wars against Islam and undermine conspiring Zionist Jews. He has commented, "I'm thankful for myself that I didn't harm anyone, but I feel someone else will do the same thing."