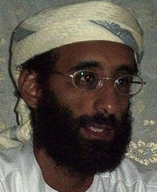 Regardless of how you may feel or may have been praying for Anwar al-Awlaki, he's now dead and has met Jesus. A missile from an unmanned aerial vehicle (UAV) in a remote part of Yemen took him out. It also took out Samir Khan. It reportedly just missed the bomb maker, Ibrahim Hassan Tali al-Asiri.

These men are the threat that started airport body screening. Asiri makes the bombs. Khan and Awlaki charm the recruits that place them.

The Pied Pipers: Khan and al-Awlaki

Awlaki and Khan were two of the most successful propagandists in the world when it came to advocating violent jihad against the United States.

Khan promoted bombing women and children in the on-line English-language magazine called Inspire that he edited and published.

Awlaki was a gifted and influential writer and preacher. He is linked to inspiring more terror plots against America in the last five years than Osama bin-Laden over his whole life-time.

Both Khan and Awlaki were American citizens.

Awlaki was a citizen by birth in America on April 22, 1971. His parents were here temporarily from Yemen. His father was a Fulbright scholar studying at New Mexico State University.

Khan was born in Saudi Arabia on Christmas Day in 1985 to parents from Pakistan. He was raised in Queens, New York. His family moved to Charlotte, NC in 2004 where his father works as an executive in information technology. Khan turned his back on his family and left to join al-Qaeda in Yemen in 2009.

All Comments are moderated for spam and abusive language.
Your Comment should appear on the site soon.