As you pray for the American citizen and pastor who has been arrested in Iran, pray also for his captors. Pray specifically for Judge Pir-Abassi who is known as the "hanging judge" in Iran. Pray God will use this upcoming encounter between him and Saeed Abedini to change this notorious judge's heart.

Here is the full story as told by my friend Paul Hattaway at Asia Harvest.

A dear personal friend is in trouble for no reason except that he loves and obeys Jesus Christ. His name is Saeed Abedini. He was born in Iran, but is now a US citizen. His wife Naghmeh is also a US citizen and they live with their two children in the US state of Idaho.

Saeed, despite being just 32 years old, has been instrumental in bringing many Iranian Muslims to the Lord, and has established numerous house churches throughout Iran.

He asked me to write his biography, and I was working on it when Saeed made one last trip back to Iran to say goodbye to his family. He knew that when his book came out it would be impossible for him to travel back to the country of his birth.

I can assure you that his testimony is quite remarkable and will bring much glory to God, and I can testify that Saeed is a God-fearing brother who loves the Lord Jesus. Before he met the Lord, Saeed was so depressed he wanted to commit suicide, and for a time he was trained by Hezbollah to be a suicide bomber. After he experienced salvation through the Blood of Jesus Christ, Saeed's whole life was so dramatically transformed that he could not help but spread the Good News to as many people as possible.

In September last year Saeed was traveling on a bus near the Iranian border when Revolutionary Guards boarded the bus and dragged him off. He has been held for months while he waited for his case to come before the courts of Iran. He is currently captive in the notorious Evin Prison in Tehran. He has been mercilessly tortured, but has not denied His Lord and Savior.

Despite being an American citizen, the US State Department has done nothing to help as they have no relationship with Iran. From the human level, there is little hope for Saeed. Indications have been given that he may be sentenced to 18 years in prison, or possibly even given the death penalty.

That is why I am asking you to pray. What politicians and the strength of men are unable to achieve, God can do!

Today we received news that Saeed's case has been assigned to a notorious judge who is known as "the hanging judge‚" because of his history of sending people to the gallows. This man has such a fearsome reputation that few lawyers in Iran are willing to defend clients before him, because the judge often has the lawyer thrown into prison as well. He is due to hand down his sentence next week. The American Center for Law and Justice has released this harrowing statement, which includes a picture of Saeed and his family. 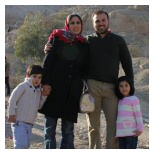 Despite all these hardships, Saeed continues to stand strong for the Lord. In a recent letter to his family from prison he wrote, "Prison is a test of faith. I was always worried that the storms of this life would break the ship of my faith, but when you stand steadfast, the storms are like a nice breeze. Nothing can break my faith. These walls have created more fervor for me to love others through sharing the Gospel, but more than that, the walls have deepened my love for my Savior. I feel the prayers of all who are praying for me."

Can you please pray that our Living God will perform a miracle for Saeed and his family?

Please feel free to forward this message to other praying Christians. There are no security restrictions on it and there is nothing in the content which the Iranian government doesn‚Äôt already know. You may also post this message in its entirety on social media or websites, if you feel it will help mobilize more Christians to pray.

For our King,
Paul Hattaway
www.asiaharvest.org