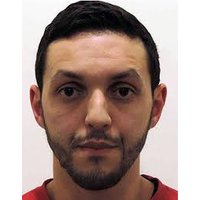 Mohamed Abrini is alleged to have helped with planning and execution of attacks on restaurants and a theater in Paris in November 2015 and with bombings in Brussels at the airport and a train station in March 2016. He's thought to have been acting on behalf of the "Islamic State of Iraq and Syria" (ISIS). He is a Belgian citizen of Moroccan heritage. He was born on December 27, 1984. He and Salah Abdeslam were childhood friends. He has likely spent some time fighting for ISIS in Syria. Authorities arrested him on April 8, 2016. He admitted to being the "man in the hat" seen together with the suicide bombers at the Brussels airport shortly before the explosions.

For more information on Wikipedia: