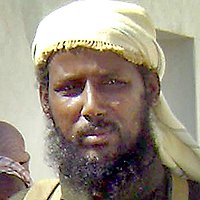 Mukhtar Robow is a leader and spokesperson for the dangerous terrorist organization operating in and from Somalia called al-Shabaab. He is its most visible member. He frequently appears in Somali and Arabic language propaganda videos. He has connections with displaced Somalis all around the globe. He is also known as Abu Mansur. In June 2012 the US government began offering up to $5 million for information that will help to locate him. It withdrew that offer in 2017. He was born in the 1960s in southern Somalia. He is a member of the Rahanweyn clan. He started his studies in Islam near his home then continued in Mogadishu and at the University of Khartoum in Sudan. Other wanted terrorists in al-Shabaab are: Ahmed Abdi aw-Mohamed, Bashir Mohamed Mahamoud, Fuad Mohamed Khalaf, Zakariya Ismail Ahmed Hersi, and Abdullahi Yare.