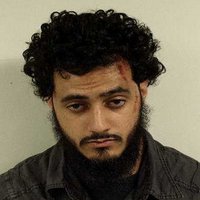 Mohamed Mahmood Alessa was arrested at the age of 20 in June 2010 as he and his friend Carlos Eduardo Almonte attempted to board a plane from New York to Somalia. In April 2013, he was sentenced to prison for 22 years. Mohamed and Carlos had referred to themselves as "Arabian knights." According to the FBI, they were intending to join a terror group in Somalia to kill, maim, and kidnap overseas Americans. Mohamed is a dual American and Jordanian citizen. He was born in Jersey City to parents from Palestine and Jordan. He would fly a Palestinian flag from his New Jersey home on American national holidays. He exhibited "radicalized" behavior in high school. He praised the Fort Hood shooter, Nidal Hassan. He listened audio and watched video by the radical cleric, Anwar al-Awlaki.

Read more on these "Ariabian Knights" and Mohamed Mahmood Alessa at Wikipedia.